The Altitude Effect of Biogenic Apatite

Biogenic apatite is a molecule made up of calcium, phosphorus and oxygen. Importantly, the phosphorus is found primarily in the form of phosphate (PO4) – which is present in both soft and hard tissues in organisms. In the context of geochemical and archaeological studies, phosphate within hard tissues (bones and teeth) is the most relevant due to their excellent preservation potential and general ubiquity in the geologic record. The PO4 is formed in these tissues via biomineralization, which remains intact and well-preserved following burial. 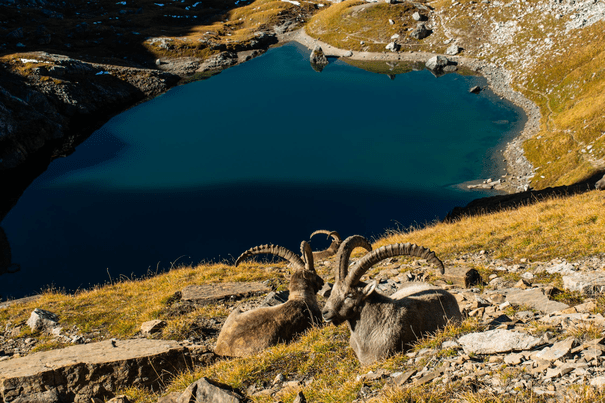 The oxygen within biogenic apatite is an important element as it varies depending on climatological conditions at the time of bone development – it can even be used to track altitude variations within an individual’s lifetime or between settlements of different populations. This is based on the fact that the isotopic composition of water taken up by individuals / organisms is reflected in the oxygen molecules within biogenic apatite. As altitude increases, the oxygen isotopes become progressively lighter (more negative δ18O values) because water rainout occurs more rapidly as air masses move upward along mountain chains. The rate of decrease in δ18O value by level of elevation varies depending on the topographic relief, wind direction and other compounding effects (e.g. continentality effect). However, studies have shown that the change in δ18O is more pronounced per meter change of altitude (e.g. δ18O -0.25‰/100m elevation) compared to the continentality distance (e.g. δ18O -0.0001‰/100m distance from sea) (Sharp, 2017).

Figure 1. Isoscape map of the δ18O distribution from rainfall in Italy (left), which is highly dependent on altitude (right). The change in δ18O by altitude varies between the Adriatic and Tyrrhenian coasts (Giustini et al., 2016).

In addition to biogenic apatite, altitude variations of individuals or populations can be estimated through the addition of complementary isotopes, including carbon (δ13C). In a study by Prado et al. (2011), the authors analyzed stable oxygen and carbon isotope ratios in tooth and bone apatite from extinct horses living in 25 localities across South America during the Plio-Pleistocene. The authors were able to demonstrate the horses living at high altitudes had distinct dietary signatures, with small C4-plant components in their diet up to 4000 m in altitude, and a pure C3-plant diet if the individual was living at altitudes higher than 4000 m. Furthermore, they found clear δ18O signatures based on latitude. Samples from the high altitude Andes Mountain corridor demonstrated the lowest δ18O signatures within biogenic apatite (21.7 – 28.3‰), compared to the higher δ18O signatures (32.0 – 34.9‰) found in the individuals living in the lower altitudes near sea-level elevation. Overall, the authors found a -0.16‰/100m in δ18O. 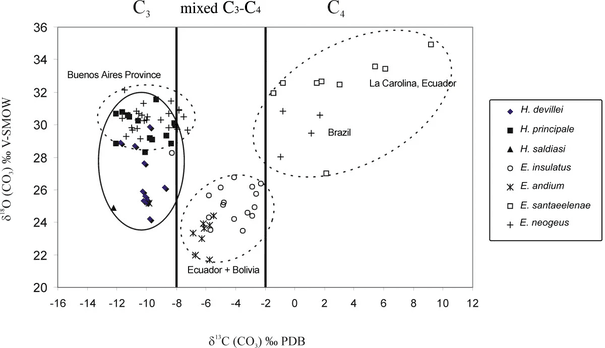