Phosphorus is a quintessential element and one of the principal components of biological molecules, alongside oxygen, carbon, nitrogen, and sulfur. While phosphorus exists almost entirely as its only stable isotope (31P), it is found primarily in the form of phosphate (PO4) – which is present in both soft and hard tissues in organisms. The associated oxygen has 3 stable isotopes (16O, 17O, 18O) which can be used in provenance studies. In the context of geochemical and archaeological studies, phosphate within hard tissues (biogenic apatites found in bones and teeth) are the most relevant due to their excellent preservation potential and general ubiquity in the geologic record.

Bones are composed of both organic material (90% of which is collagen) and phosphate (principally biogenic apatite – i.e. calcium phosphate); the latter formed through the process of biomineralization (wherein living organisms produce minerals). During the diagenesis of bones, much of the organic portion is chemically and/or physically altered, whilst the apatite remains intact and well-preserved. For this reason, apatite is an excellent material for further geochemical analysis.

Phosphate can be analyzed on any sample with biological apatite – those with a calcium phosphate framework. However, preservation potential is variable and the specifics of biomineralization make different forms of bioapatite suitable depending on the subject for inquiry. Bones (when compared to teeth), have higher porosity, higher organic content and smaller crystallite size making them more susceptible to recrystallization and isotopic alteration. Within sample types themselves subsampling is important, different types of bone have different porosities with ‘cancellous (spongy) bone’ being more porous than ‘cortical (compact) bone’. Within teeth the principal components are ‘dentin’ and ‘enamel,’ while both are less susceptible to alteration than bone, enamel is considered the least susceptible to alteration. However, this does not always make it the suitable target for analysis. Phosphatic tissues (such as bone) can remodel during an animal’s lifetime and tend to provide an average composition (albeit with a seasonal bias). By contrast, bones tend to precipitate progressively before becoming physically inert and as such are a snapshot of a period of time. How long a time is dependent on the size and growth rate of the animal in question, a rodent tooth may grow over a few weeks, tusks from an elephant may span decades! 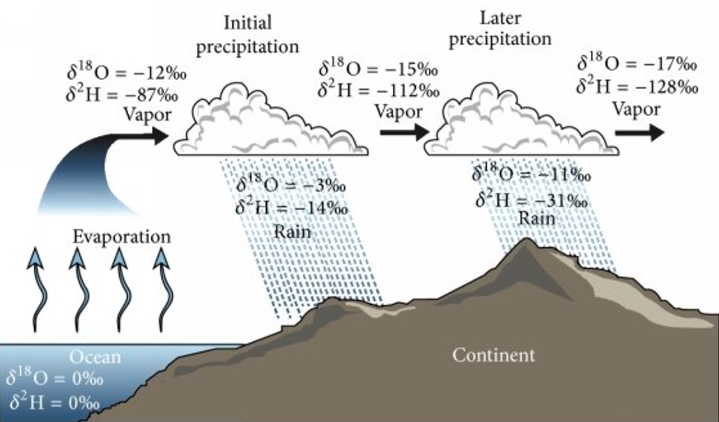 The oxygen within biogenic apatite (CaPO4) is an important element as it varies depending on climatological conditions at the time of bone development. The isotopic ratio of oxygen (18O/16O) varies geographically as a result of a number of factors related to the hydrologic cycle, including distance from water sources, temperature and elevation. The ocean is 0‰ by definition (SMOW being the isotopic standard), the light isotope (16O) evaporates preferentially and so the vapor that forms above zones of evaporation is isotopically negative. The dominant control on the composition of precipitation from a given air mass is the fraction of water vapor remaining, the heavy oxygen fraction (18O) is rained out first, followed eventually by (16O). This results in a pattern of isotopic signatures across latitudes and altitudes as well as across ocean-continent transects. In some cases temperature can also be a dominant factor impacting oxygen isotopic signature – for example, δ18O tends to be much lower at high latitudes (e.g. the Arctic) compared to lower latitudes (e.g. the equator). It is important to note that in addition to the isotopic composition of ingested water, δ18O of apatite is also dependent on the temperature of formation. In endotherms such as mammals (which maintain a constant body temperature) changes in bone δ18O reflect changes in ingested water. For example, oxygen isotope data for teeth of mammal herbivores that span a range of environments show intra-tooth δ18O variability that mirrors both seasonal and mean annual differences. 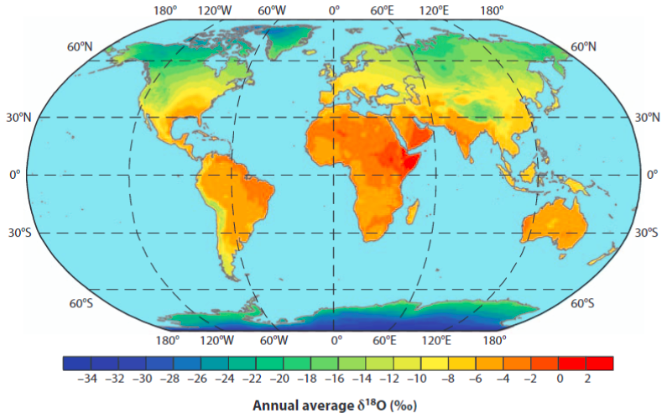 Based on these known variations, isoscapes of oxygen have been developed at various scales – from local/regional to global in scale. Through the measurement of the δ18O of biogenic apatite within bone samples, the origin and movement of organisms can be determined through space and time. For example, Tütken et al. (2004) analyzed the δ18O of biogenic apatite in primary bone tissues of dinosaurs to reconstruct annual seasonality during its lifetime. The authors found variations of 2‰ between lines of growth, connected to monsoon variability in the dry winter (higher δ18O) compared to the relatively wet summer (lower δ18O) monsoons. δ18O has also been used to probe thermoregulation in dinosaurs more broadly. With strong evidence argues for heterothermy (balancing between self-regulating and responding to environmental changes in certain species).

Beyond climatological variability, the δ18O of biogenic apatite in bones has been utilized to connect mammals to altitude. For example, Mayr et al. (2016) tested the biogenic apatite in the bones of pig, deer and cattle from archaeological sites in the Alps. They found that the oxygen within biogenic apatite was mainly controlled by the altitude of the mammals, with negative correlations associated between the level of altitude and δ18O signature in the bones. As δ18O of phosphate is controlled by meteorological source water we can couple it with other geochemical provenance indicators such as ‘strontium’ (87Sr/86Sr) or ‘lead isotope ratios’ to create a particularly powerful toolset! One that can deconvolve spatial and temporal influences.

The connection of bones to different environmental conditions can be applied to the field of archaeology. This can provide information on the spatial and temporal patterns of migration or even contextualize historical events with climate change. For example, Sarkar et al. (2016) utilized biogenic apatite isotopes on bone samples from the Bronze Age Harappan civilization to reconstruct migration patterns and monsoon events between 5,000-9,000 BP (before present). The authors concluded that changes in subsistence agricultural strategy were the cause of the civilization’s collapse rather than climate change as previously hypothesized.

Mayr, C., Grupe, G., Toncala, A. and Lihl, C.M., 2016. Linking oxygen isotopes of animal-bone phosphate with altimetry: results from archaeological finds from a transect in the Alps. In Isotopic landscapes in bioarchaeology (pp. 157-172). Springer, Berlin, Heidelberg.