The five lead isotope species that are commonly used in geochemical studies.

Lead isotope ratios within the uranium decay chain are a function of the amount of uranium and thorium present. Geological processes affect the amount of U and Th present, thus, lead isotopes serve as a useful tool for understanding the nature and timing of these processes. Since the lead isotopic composition of geologic material is a function of three independent decay chains, there is a great potential for isotopic variability in minerals.

Lead isotopic ratios may be used in age dating and petrogenetic tracing of igneous, metamorphic, and hydrothermal rocks. Since there is a divergence in chemical behavior between uranium, thorium, and their daughter elements, many geological processes can lead to extensive fractionation of the various isotopes. This results in distinctive patterns that allow determination of rock histories. For example, the lead isotopic composition of volcanic and plutonic rocks can be used to trace the sources of diverse magma types originating from different tectonic settings. 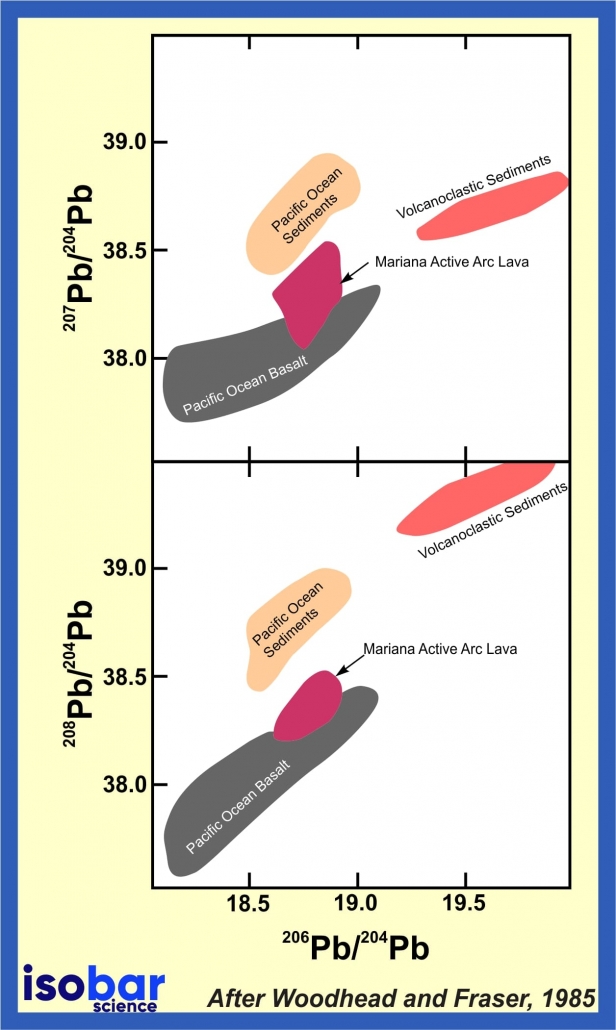 The distinctive lead isotopic patterns that are present in different rock lithologies (and overlying soils) allow one to correlate lead isotopes to specific areas on the earth’s surface. As different rocks present distinct parent/daughter ratios, this property has been extensively used for provenance study of weathered and eroded materials, namely dust. For example, dust sources have distinct lead isotopic signatures, so dust that has traveled far distances can be traced back to its origin region. 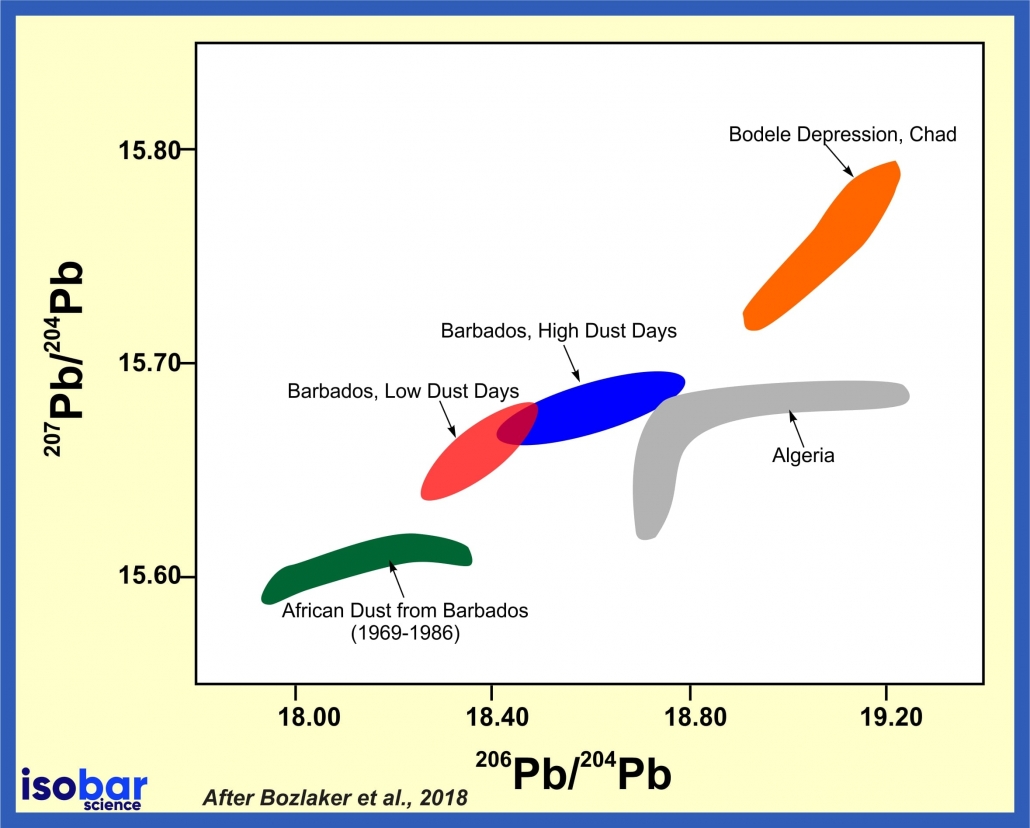 This geochemical fingerprinting can also be used in archaeological studies. From very early in the study of ancient metals, one important goal was to establish the geological origin of the metal used to make particular metal artefacts, and in this way, directly addressing issues of trade, trade relationships and movement of objects. Since the isotopes of lead do not change their form from its geological origin (or ore form) to the artefact, the artefacts should hold the information on the site location where the lead was mined.

Lead is a non-essential and toxic metal whose biogeochemical cycle has been significantly impacted by human activity. Lead enters the environment during production (including mining and smelting), use (batteries, pigments, ceramics, plastics), recycling, disposal of Pb compounds, combustion of fossil fuels (coal, former use of leaded gasoline), use of mineral fertilisers and sewage sludge application, among other pathways. As a result, it’s possible to analyse different isotopes of lead to measure human-impacts through time by investigating unique lead isotope ranges that are correlated to specific types of human activities. In recent years, there has been a growing interest in using lead isotopes to trace the source and origin (geogenic vs. anthropogenic) of contamination and to evaluate the persistence of these elements in the environment. For example, lead isotopes in gasoline can be used to analyse the continental source of the gasoline as well as changes in gasoline composition through time. 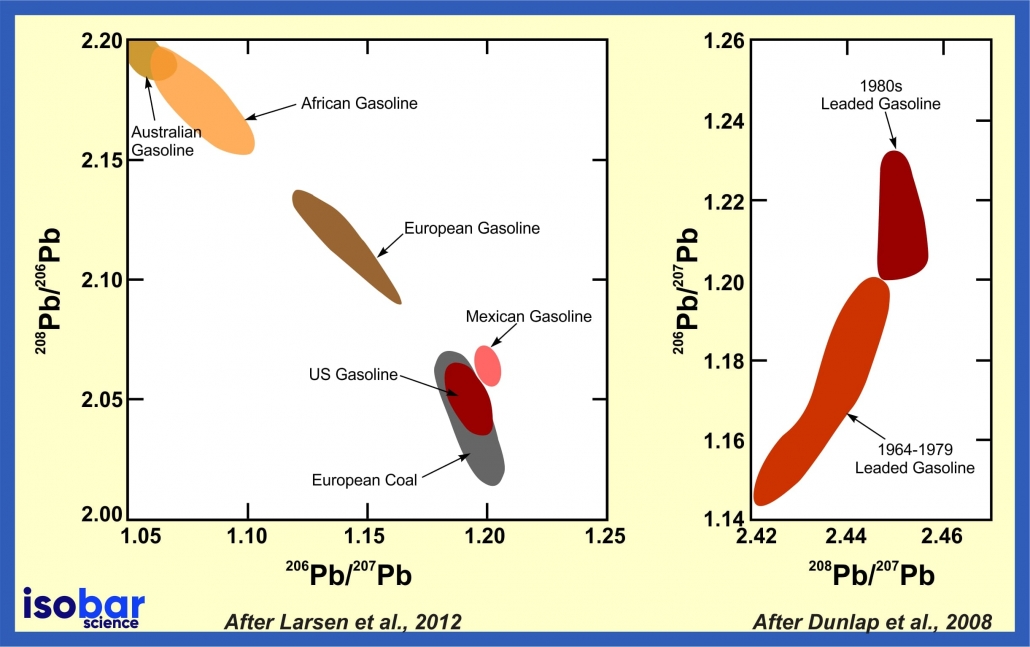 In many cases of homicides there is often a lack of physical evidence to identify the perpetrator. Lead isotopic analysis of small fragments of bullet material can often provide a positive identification to the culprit assuming that the bullet cartridges within a single batch all have the same isotopic composition. For example, different brands of bullets often have distinct lead isotopic signatures. In this way, lead isotopes can be used to match a bullet found on a crime scene with bullets from potential suspects. This works when the full bullet is not available for ballistics testing. 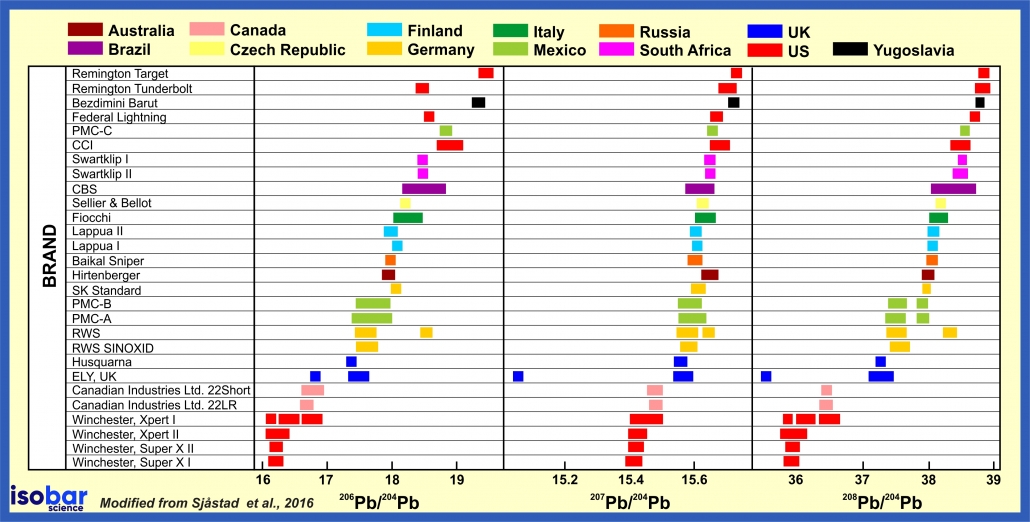 Pb isotope signature of bullets from different manufacturers around the world (after Sjåstad et al., 2016).