Caves are natural intact cavities found in many different landscapes which have been accessible to humans and animals for millions of years. Though caves remain in-tact for vast periods of time, water flow through the cave systems result in the development of mineral cave structures – including calcite crusts, stalactites and stalagmites. This water originates as precipitation but is altered as it enters the cave through the overlying soil, fractionating and taking up ions along its path. Specifically, the rainwater integrates CO2 resulting in the development of carbonic acid and dissolving calcite (CaCO3)  during the throughflow. Once the water is exposed to the cave air, the dissolved CO2 escapes, leading to precipitation of calcite . Additional ions (including iron and acids) from overlying vegetation and soil impact the chemical make-up through time, producing distinct changes in cave deposit coloration. The cave deposits have the potential to act as archives of the environmental and climate conditions during deposition.

The temporal resolution of cave deposit archives vary depending on numerous local factors, ranging from seasonal to thousands of years. However, deposits are not necessarily consistent through time as they rely on the constant input of water. During periods of drought, a “hiatus” in cave deposit growth may occur, resulting in gaps within the archive record. On the other hand, in periods of more intense rainfall, growth may occur at a faster rate, resulting in larger deposits per unit time.

Cave deposits are known as Speleothems (spelaion = cave, thema = deposit) and come in a variety of forms, including:

Pillars: cone-shaped deposits that form from water falling from stalactites onto the cave floor, eventually fusing to create floor to ceiling pillars / columns

Flowstones: thin elongated deposits along the cave floors and walls in a variety of geometries including curtains (wavy sheets), gours (stream ripples) and waterfall cascades

Given the potential for varied growth and periods of growth hiatus, the accurate dating of cave deposits is vital to developing an accurate paleoclimatological record. Cave deposits can be dated using a few different methods, including Uranium Thorium (U-Th) and Radiocarbon (14C) dating, which provides a relationship between distance (growth) and age. 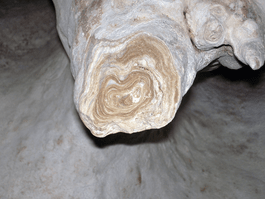 Radiocarbon dating of cave deposits tends to be less accurate than U-Th dating due to the carbon reservoir effect. As meteoric water moves through the vegetation and soil overlying the cave, the CO2 therein is in equilibrium with the atmosphere. However, as the water continues its journey through the bedrock, it incorporates relatively old CO2 (14C free), putting the water at disequilibrium with the atmosphere – thus making the cave deposits measure far older than in reality. Similar to the marine reservoir effect, a calibration can be used to reduce (but not entirely eliminate) this uncertainty (Southon et al., 2012).

The optimal cave samples for dating using the U-Th method are those that are considered “closed systems”, which do not allow matter to enter or release from the cave deposits – thus, there is limited exchange of uranium and thorium with the cave environment. Stalagmites, flowstones and travertines tend to be closed systems and are used in paleoclimate studies. Whereas stalactites and soda straws have extremely thin layers, making them very challenging to sample and unreliable archives for paleoclimate reconstructions.

Certain cave samples may be open systems due to their formation, diagenetic processes or even significant changes in environmental conditions (e.g. flooding of caves; Borsato et al., 2003).

In cases where the cave deposit sample in question has potential for uncertainty for both types of dating, a combination of the two can be used to pinpoint inaccuracies and develop a more robust chronology (Tuccimei et al., 2011). This dual-dating methodology can also be implemented in cases of very young speleothems which cannot be constrained by U-Th dating alone (e.g. Columbu et al., 2019).

Stable isotopes of oxygen and carbon are commonly used as climate proxies from cave deposits, as a means of reconstructing precipitation, vegetation, temperature and humidity – ultimately as a record of climate oscillations or events.

Carbon Isotopes (𝛿13C) in speleothems are mainly driven by temperature and in some cases humidity, with influence from soil and vegetation processes as demonstrated in a recent global analysis (Fohlmeister et al., 2020). However, the use of these isotopes as an environmental proxy are less straightforward than isotopes of oxygen.

Lead (Pb) isotopes can be used to indicate the type of mineralogy through which the water infiltrated prior to entering the cave (Yang et al. 2016), as well as variations in hydrological conditions (Yang et al. 2016) and atmospheric lead pollution (Allan et al. 2015).

The utilization of stable isotopes for climate reconstruction can be complicated by leads and lags introduced into the system from variable water residence and transit times within the cave systems, seasonal variations in deposition and growth hiatuses. These complexities highlight the importance of a robustly dated speleothem prior to attempting reconstructions.

When selecting a cave deposit sample for dating and paleoclimate reconstructions, it’s best to choose samples that are active (e.g. stalagmites with wet surface which receives drip water from the above) or  in-tact with few growth hiatus periods. Ideally, choose samples that have limited influence from outside conditions, found deeper in the cave environment in an area undergoing active growth.