The analysis of the uranium-thorium (U-Th) decay chain can be used to date a variety of  calcium carbonate (CaCO3) bearing samples, including cave deposits (e.g. speleothems), calcium carbonate rock, corals, shells and (in some cases) bones. This method can be used to date samples existing from present day until 500,000 calendar years before present (cal BP). Many of these sample types can also be dated using the radiocarbon (14C) dating, however, there are advantages and disadvantages of each method.

U-Th dating differs from radiocarbon dating as it measures a decay chain ratio, rather than the quantity of a decay product (abundance or remaining nuclide left over after radioactive decay). U-Th dating is based on the activity ratios of parent (Uranium) and product (Thorium) isotopes, by calculating the disintegration of the parent to the daughter over time. This is done by the detection (mass spectrometry) of both the parent (234U) and daughter (230Th) products of decay. When uranium decays, it goes through a series of decay steps (beginning in 238U) until it eventually reaches a stable isotope (ending in 206Pb). Below you can see the initial (parent) isotope (238U) decaying into the daughter isotopes: 234U, then 230Th, 226Ra, and so forth. The parent nuclide (e.g. 238U) at the top of the decay chain has a much longer half‐life than all the intermediate nuclides (e.g.230Th). As a result, the radioactivity from this parent nuclide slowly decays, while the daughter is being produced at a higher rate. Eventually, the quantity of parent decayed and daughter produced will occur in equal quantities, producing the secular equilibrium.

Until that state of equilibrium is reached, measurement of the ratio between 234U/230Th allows us to calculate the time that has passed since formation of the sample, thus giving the age of the sample. In contrast, for radiocarbon dating the amount of 14C simply reduces over time, producing an inversely proportional relationship between 14C quantity and age of the sample.

At time zero, a given sample U-Th ratio would be made up entirely of uranium. As time goes on, this uranium decays into thorium and thus the sample’s U-Th ratio will have proportionately higher thorium content through time. Due to this, younger sample ratios are made up of more parent atoms since they have not undergone very much decay, whereas older sample ratios are made up of more daughter atoms since they have undergone more decay. It is through this relationship that we can approximate sample age.

14C dating is applicable to many more different sample types than U-Th dating. 14C dating simply requires a sample to be carbon-bearing whereas U-Th dating requires the sample to contain uranium and non-detrital thorium. 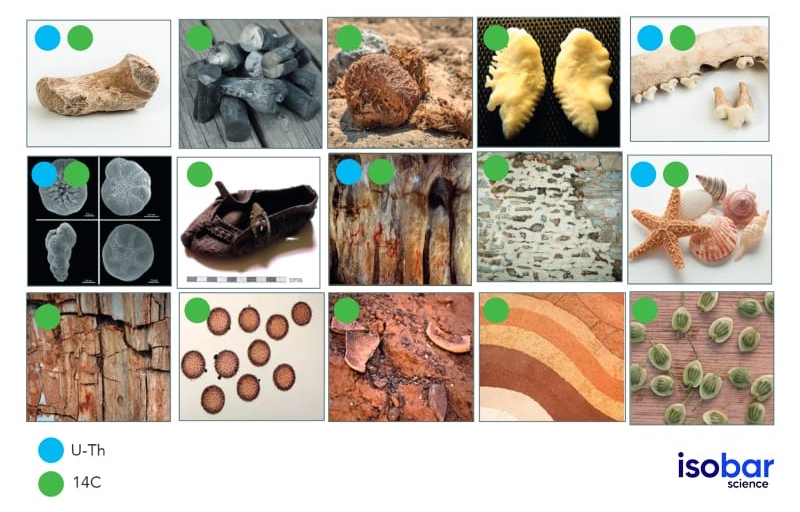 The applicability of U-Th and 14C dating are limited by certain assumptions in terms of the sample quality and contamination. For 14C dating, a sample may be contaminated if it is embedded with an external carbon source of a different age, from both natural (e.g. root penetration in wood, soil, or charcoal) or artificial (e.g. sample conservation chemicals or packaging) sources. On the other hand, U-Th dating contamination is generally from natural sources that introduce external uranium or thorium into the sample material. For example, excess thorium may be integrated into a sample through detrital material deposition in lake systems, or infiltration of uranium into bone samples after burial. Such sources of contamination can introduce significant age errors into sample measurements but can be predicted ahead of analysis.

For 14C dating, chemical (e.g. cellulose or collagen extraction) and physical (scraping exterior layers) pretreatments can be utilized to limit the contamination and create a sample of higher purity. Conversely, in U-Th dating, physical removal of detrital (excess thorium) can be completed to improve the certainty of results. Furthermore, the sample can be screened using ICP-MS to evaluate the potential magnitude of detrital material, and XRD measurement can provide information on whether or not diagenesis has occurred; together estimating the potential reliability of U-Th dating for the sample material.

Before choosing a dating method to use, it’s important to understand the limitations of your sample type in order to estimate potential sources of contamination, as some sources may lead to greater uncertainties in U-Th dating over 14C dating or vice versa. For example, bones with potential uranium infiltration may be better suited to 14C dating rather than U-Th dating, whereas coral samples with potential errors due to the marine reservoir effect may be better suited to U-Th dating.

Duration: 1 minute, 31 seconds || Speaker: Maren Pauly, PhD
This video excerpt is part of Isobar Science’s webinar: An Introduction to Uranium-Thorium Dating.
Disclaimer: This video is hosted in a third-party site and may contain advertising.