The concentration, composition and circulation of atmospheric dust can play an important role in the global radiation budget (and therefore the earth’s climate and weather patterns), as well as biogeochemical and hydrological cycles. Given the important role of dust, reconstructing origin and circulation through space and time is a very important field of inquiry.

The triple isotopes of strontium (Sr), neodymium (Nd) and hafnium (Hf) are inherent in many geological settings and therefore contribute to dust sources. As a result, they have been used individually and in tandem to track the origin of sediments and dust. The utilization of at least two of these isotopes can be very useful in such an inquiry as they are coupled during crustal processes that lead to the development of igneous and clastic rocks and are not significantly altered by other processes (e.g. weathering, transportation, deposition). By tracking the composition of dust based on these isotopes, it is possible to pinpoint the likely originating geological setting.

In a study by Barkley et al. (2022), the researchers analyzed the origin and global movement of African dust during a peak circulation period – from winter to spring. Much of this dust is transported to the tropical Atlantic ocean and the amazon, providing vital nutrients (phosphorus and iron) to these areas thereby fueling the highly productive ecosystems.

The researchers collected dust samples from Cayenne (French Guiana) daily from 2014 – 2016 and measured the dust mass, as well as strontium (87Sr/86Sr) and neodymium (143Nd/144Nd) isotopes using a Thermo Scientific Neptune Plus High performance Multi-Collector Inductively Coupled Plasma Mass Spectrometer (MC-ICP-MS). By integrating the isotopic results into a Bayesian mixing model, the researchers were able to develop a profile of the different dust sources based on the isotopic signatures of North African Potential Source Areas (PSAs). Learn more about tracking the origin of dust samples. 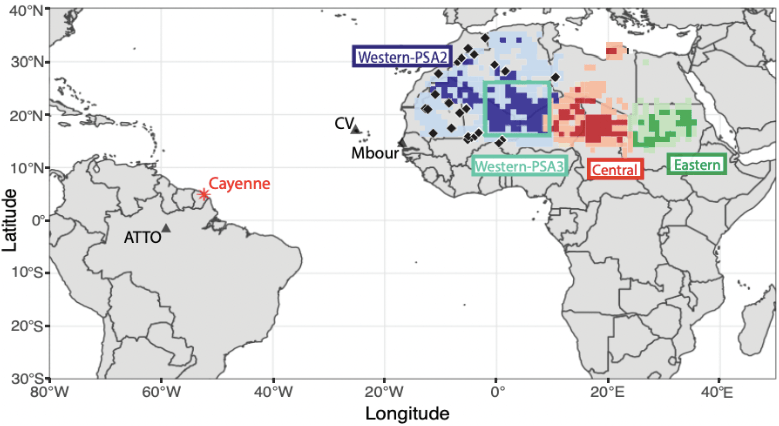 It was discovered that the source region varied strongly based on an interannual pattern, with the Western Africa PSA supplying 53% of the dust in the winter of 2014 and the Central North Africa PSA supplying 44% of the dust in winter 2016 – with a statistically significant difference between the two years. These two winters varied as a consequence of the relative strength of the North African anticyclone known as the Libyan High – with its zonal winds impacting dust admission and transportation. When the Libyan High was relatively strong in 2014, the winds were supplying dust from the west, resulting in a high contribution of the Western Africa PSA.

By successfully determining the source and movement of dust in this region, the researchers were able to reconstruct interannual variability and predict the implications climate change will have on this transportation. Specifically, the researchers postulate that the precipitation will increase over Northern Africa, likely reducing the dust availability and transport to the Amazon – potentially resulting in reduced nutrients available for amazon vegetation.

Figure 2. A time series demonstrating the proportion of dust from each PSA analyzed using the Bayesian mixing model MixSIAR from January 2014 – December 2016.

The isotopic data and MixSIAR code for this publication is available online.