Stable isotopes are used extensively in environmental science, archaeology, food science, human impacts and forensics for the reconstruction of climate, ecosystems, plants, diets and migration through space and time. This interdisciplinary research is based on the fact that specific isotopic signatures are tied to local water and geology – allowing one to connect a sample to a specific place. Maps demonstrating variability in specific isotopes across a landscape have been produced in varying spatial resolutions (local, regional, global) – known as isoscapes (West et al. 2008), defined as “​​spatially explicit prediction of isotopic values across a landscape”. 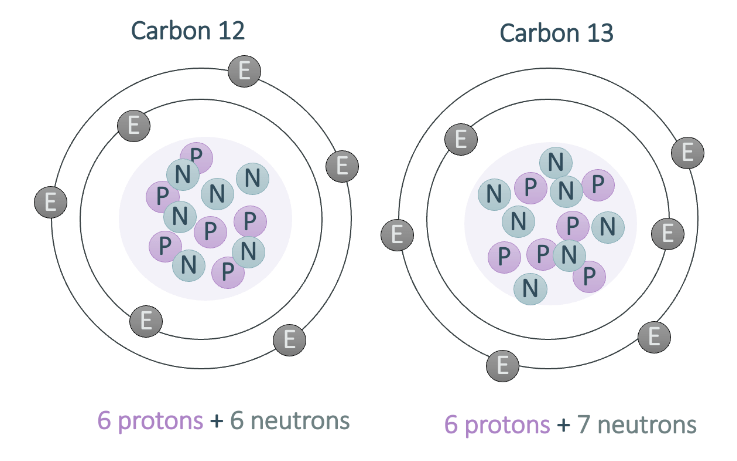 Isotopes are when you have atoms with the same atomic number (same protons) but different numbers of neutrons and therefore different mass numbers. Many elements have more than one isotope. Isotopes of the same element have different masses due to the different numbers of protons and neutrons that make up the nucleus. Lighter isotopes (those with less protons and neutrons) are generally more common in the environment. When measuring the abundance of these different isotopic forms of an element in the environment, it’s helpful to measure them as a ratio relative to each other (e.g. 13C:12C), with differences in abundances expressed as ratio of heavy to light form. This ratio is then compared to known international standards (e.g. VPDB: Vienna Pee Dee Belemnite for carbon), thereby calculating the delta of this ratio: δ13C.

It’s important to have this standardized isotope, because very small differences in atomic mass causes subtle differences in the element’s behavior during chemical reactions which alter the ratio of heavy to light isotopes. We see differences among organisms and across different habitats in their stable isotope ratios. There are many different reasons for the isotopes to vary (or fractionate), including through photosynthesis, evaporation, condensation, precipitation, respiration and many other physical and chemical processes.

The delta (e.g. δ13C, δ18O, δ15N) or abundance ratio (e.g. 87Sr/86Sr) of stable isotopes form the basis of isoscapes. These maps predict the isotopic delta and/or ratios over space using elemental models combined with GIS. With recent developments in computing capabilities, GIS and remote sensing technology as well as improved accuracy of mass spectrometry, isoscapes are being developed in many contexts around the world. 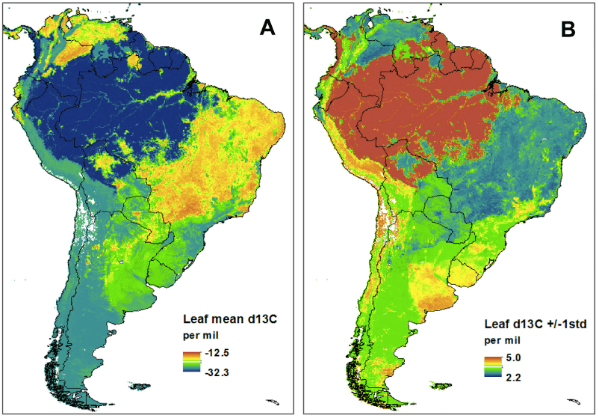 The first step in developing an isoscape is identifying and modeling the physical processes in the landscape that result in variations in the isotopic composition of the rock or water in question. For example, variations in air masses (e.g. loss of moisture through precipitation) are the key driving variation in water δ18O and δ2H globally – resulting in relatively depleted δ18O and δ2H in high latitudes compared to enriched δ18O and δ2H in low latitudes. This relationship is demonstrated by Ehleringer et al. (2019) in the left map based on the distribution of isotopes reconstructed from tap water in the continental USA.

Whilst oxygen and hydrogen isotopes are tied to the global water cycle, carbon isotopes (δ13C) are dependent on atmospheric carbon dioxide and the integration and fixation into plant tissues. Plants fix carbon through three main pathways: C3, C4 and CAM, each discriminating against δ13C in a predictable manner. Based on this discrimination, these plants demonstrate different isotopic ranges through space, allowing the establishment of a δ13C isoscape. For example, Powell et al. (2012) developed an isoscape of South America (map inset) using the δ13C of plant leaves by mapping the relative distribution of C3 and C4 plant varieties. 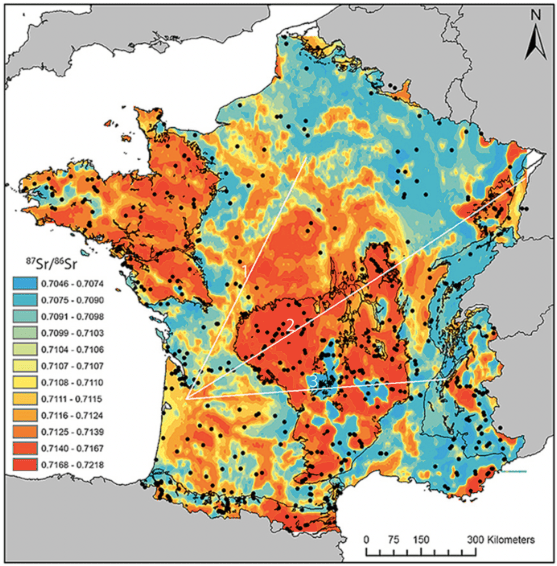 Dissimilar to oxygen and carbon isotopes, strontium ratios (87Sr/86Sr) within the landscape are based on the fact that geological units have a specific signature of (87Sr/86Sr) based on their formation history. . This property produces a specific signature within soils overlying rocks, plants growing in these soils and eventually organisms and humans consuming these plants. Moreover, the weathering of rocks into groundwater ties this strontium signature to water systems as well. As a result, the mapping of rock types distributed through a landscape allows one to connect people, animals and plants to a location based on their consumption of plants and water. Contrast to δ13C, δ18O, δ15N, the 87Sr/86Sr ratio does not fractionated through biological processes and can provide a more robust picture about the animals and plants living in a specific landscape. For example, Willmes et al. (2018) developed an isoscape of bioavailable 87Sr/86Sr in France (left map) as a framework for archaeological provenance studies.

While there are many local, regional and global isoscapes available for a variety of isotopes, if one does not exist to match your research site and/or spatial resolution, it is possible to develop a basic map of isotopic signatures in your region(s) of interest. In this case, you must collect a series of samples from the environment (including rock, soil, water, plants and animals) spanning a variety of locations. These individual samples must be analyzed using the relevant isotope to serve as a baseline for connecting your samples to place.

Contact the lab team today to discuss a strategy for the development of your isotope baseline in detail.

Archaeology: isoscapes are used in archaeological research as a means to reconstruct the movement and diet of past civilizations and the origin of metal artifacts. (Read more about Isotopes in Archaeology)

Paleoclimatology: isoscapes of modern landscapes are used to contextualize the variability of isotopes expected in a specific landscape as a basis for reconstructing historical variation. (Read more about Isotopes in Paleoclimatology)

Forensics: isoscapes are vital for the reconstruction of human profiles (including interpreting ancestry and evaluating social status) of victims as well as provenancing trace (e.g. soils) and illegal (e.g. poached wildlife) evidence. (Read more about Isotopes in Forensics)