In order to analyze the sample we must chemically convert aqueous NO3 into headspace N2O. Nitrite (as another species along the reduction pathway) is first removed from the solution via Sulfamic Acid. As water sample chemistry can affect results samples are matched to standards of matching salinity and NO3 concentrations. Concentration is determined by spectrophotometry. The chemical reduction is carried out using Ti(III)Cl conditioned with Zinc powder preconditioned to remove Ti(IV). Samples are stoppered and crimped in gas-tight acid-washed vials purged with an inert gas. Following the incubation of the sample with the reducing reagent the sample is ready for analysis.

Following its chemical reduction the sample is analyzed by continuous flow (CF) Isotope Ratio Mass Spectrometry (IRMS).The N2O is isolated via a modified GasBench(II) and cryotraps. Once the analyte has been cryo-trapped and separated from interfering gasses via a GC the isotopic composition is measured via Mass Spectrometry. (Casciotti et al., 2002; Foreman et al., 2016; and Altabet and Wassenaar, 2017). Isotope ratio data are reported as delta (δ) values in units of parts per thousand (per mill) (‰) (Coplen, 2011).

Isotope ratio data are reported as delta (δ) values in units of parts per thousand (per mill) (‰) (Coplen, 2011). Nitrogen isotope ratios are reported relative to N2 in air (Mariotti, 1983) and oxygen isotope ratios are reported relative to VSMOW reference water and normalized on a scale such that δ18OSLAP = -55.5‰ (Coplen, 1994; IAEA, 2017). The results are also presented graphically on a plot which includes representative areas of the isotopic composition (δ18O and δ15N) of various nitrate sources (Kendall et al, 2007; Hastings et al., 2013). 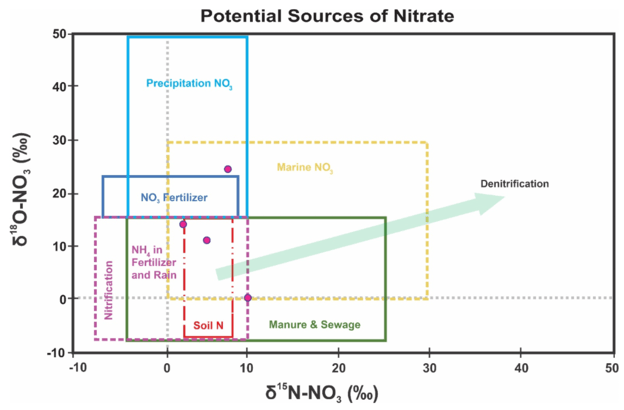