There are a number of nitrate (NO3) isotopologues due to the high numbers of nitrogen and oxygen isotopes but only a few relevant to most studies. Nitrogen has fourteen short-lived radioisotopes (the longest lived being nitrogen 13), and 2 stable isotopes – nitrogen-14 and nitrogen-15. Nitrogen-14 makes up 99.6% of the natural nitrogen found on earth. It’s these two stable forms which are used in isotopic analysis by measuring the  δ15N (the ratio of the heavier isotope to the lighter). Oxygen has fifteen short-lived radioactive and three stable isotopes – oxygen-16, oxygen-17 and oxygen-18. The majority of natural oxygen is made up of the light 16 form (99.7%), followed by oxygen-18 (0.2%) and finally the trace oxygen-17 (0.04%). When measuring these isotopes, the nitrate is broken down into nitrous oxide (N2O), which allows us to measure the nitrogen (δ15N) and the oxygen (δ18O) isotopes separately. 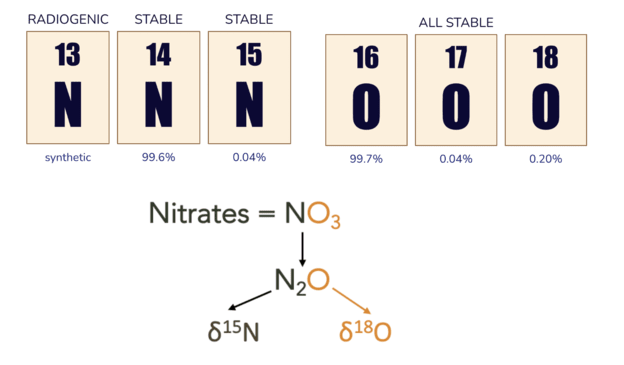 Nitrogen is predominantly available as nitrogen gas (N2) in the atmosphere and is present on Earth in different physical forms, chemical compositions, and redox states. Nitrogen is essential to life on earth, existing as the principal component of the atmosphere – in a form that is only usable by organisms once a series of microbial transformations occur (e.g. nitrogen fixation and assimilation) either within the soil profile or in a marine setting. While nitrogen cycles naturally, there are also anthropogenic sources (such as fossil fuel emissions, wastewater, and fertilizers)  often released in toxic quantities, which can be incorporated and eventually taken up by plants, animals and humans. This can have devastating effects on the biosphere and the environment as a whole. Of particular concern are dangerous increases in nitrogen in rivers and groundwater – eventually making its way into drinking water. Nitrates are dissolvable, making it easy for nitrates to move through water and soil within the landscape, particularly via drainage channels in agricultural fields eventually migrating to rivers and lake systems.

The interpretation of δ18O and δ15N results lies with the submitter as familiarity with local hydrological and environmental systems is required.

Register here to watch the webinar on-demand.
Disclaimer: This video is hosted in a third-party site and may contain advertising.

The excess of nutrients resulting in negative effects on the environment, health and economy is known as nutrient contamination. Nitrates are utilized to analyze the supply of excess nutrients (e.g. nitrogen and phosphorus) into the environment through different sources including agricultural inputs (fertilizers, manure) and urban/industrial centers (via fertilizer use, vehicle emissions, stormwater runoff, power plant emissions and wastewater). These sources can be point source (originating from a single source traveling directly to a water body) or nonpoint sources (“diffuse” in nature, from multiple sources that vary with space and time). 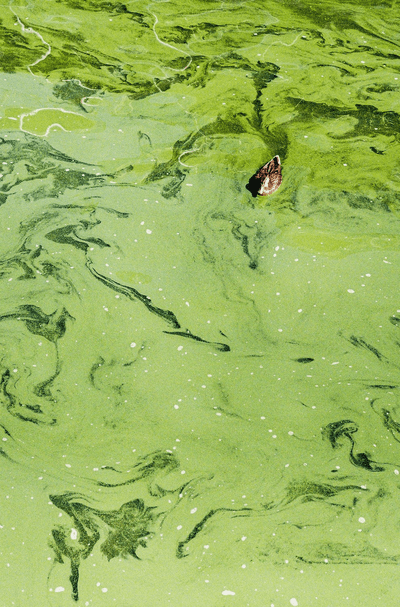 Nutrient contamination can produce harmful algal blooms, which have detrimental effects both for the local environment such (as food web shifts, and biodiversity loss), and for the local population and tourism (such limitations on recreational activities and fishing). There are different types of algal blooms, some of which release toxins into the water that can kill aquatic life and make it unsafe for humans to be in or near the affected area. Nutrient pollution (eutrophication) is another serious associated problem, nitrate is typically a limiting nutrient in the environment, and its excess leads to an explosion in algae growth, blocking out the light needed for aquatic plants to live. As the booming algae population and plants start to die they consume the oxygen in the water leaving dead zones where the oxygen levels are too low for aquatic animals to survive and indirectly starving future grazers and predators. Coastal communities in Florida are particularly affected such as Bradenton Beach which has seen a large number of washed up dead fish and other marine life as a result of the ongoing algal bloom and the wide-spread manatee die-off seen throughout the south of the state.

High nitrate content in drinking water poses a concern for public health, resulting in stomach, liver, respiratory and neurological problems from overexposure. This is particularly the case for infants as it can impair the blood’s ability to transport oxygen around the baby’s body – a condition known as methemoglobinemia or blue baby syndrome.

The various nitrogen sources which could be the root of contamination have known isotopic ranges, thus measuring δ18O and δ15N of dissolved nitrate in water samples can help identify the source. Knowledge of the source is required to address the primary causes of contamination through remediation. Data on sources is crucial for managing, tracking and mitigating further nitrate contamination of waterways.

Nitrogen is often used in agricultural settings as a potent fertilizer. While the nitrate within fertilizers are useful for plant growth, as the excess fertilizer dissolves and sinks into the surrounding soil, it ultimately ends up in rivers, lakes and the ocean, producing harmful algal blooms (eutrophication).

Furthermore, nitrate has been found as a widespread contaminant in fruits and vegetables due to fertilizer and herbicides used in agriculture. Recent studies have suggested that vegetables produced using conventional methods have significantly higher nitrate contamination than those produced using organic methods (Aires et al. 2012).

Urban centers are a major source of anthropogenic nitrates in the environment – with higher atmospheric nitrogen in the atmosphere and rainwater closer to urban areas – resulting in reduced retention of nitrogen in watersheds and increased downstream exportation; particularly during storm events. Similar to agricultural sources, this often leads to eutrophication as well as period hypoxia (low oxygen conditions) in freshwater and coastal ecosystems. This can be partially balanced by the retention of nitrogen in urban landscape ecosystems, including on lawns, urban streams and in manmade retention ponds. However, the increase in impervious surfaces in urban areas (e.g. buildings, sidewalks, roads) ultimately limit the uptake of nitrogen in the soil, leading to an increasing amount in water systems via surface runoff.

Biofilters are increasingly being used in urban and industrial environments to reduce nitrate levels in surface and groundwater systems. Studies suggest that more than 70% of nitrogen can be captured and removed in this manner in simulated laboratory settings (Bratieres et al. 2008). However, recent research has demonstrated that biofilters may perform poorly in more realistic conditions, such as large pulsed storms (Feraud et al. 2022).

In cases where the source regions of contaminants overlap in terms of their oxygen and nitrogen isotopic signatures – making it difficult to identify a single contamination source – boron isotopes (δ11B) can be used to enhance the source tracking. Fertilizers, soil, manure, and sewage have characteristic nitrate isotopic signatures (δ18O, δ15N), however, the ranges overlap making it difficult to distinguish discrete sources. Differentiating between manure and sewage is particularly difficult as the characteristic nitrate isotopic signatures for these sources are indistinguishable. Additionally, denitrification and nitrification of organic compounds cause isotopic fractionation further obscuring determination of the original nitrate source(s). Studies have shown that boron is substantially enriched in most nitrate contamination sources, and has the advantage of exhibiting distinct isotopic signatures for wastewater and animal manure.

Anthropogenic sources of boron are introduced into this cycle through emissions released from industrial activities, as well as landfill disposal, and even surface runoff through fertilizer, detergent, and other chemicals. 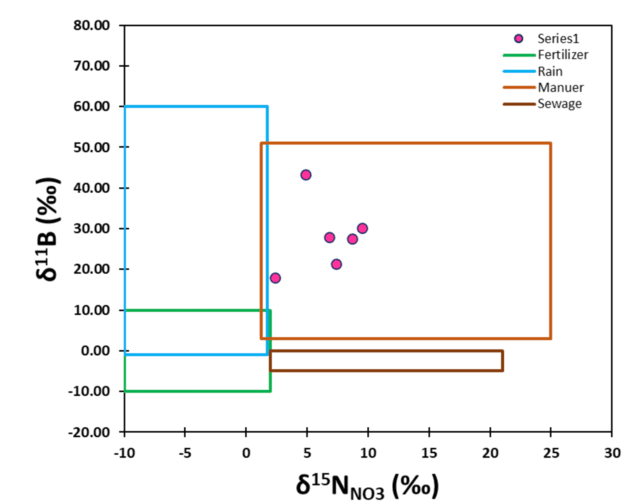